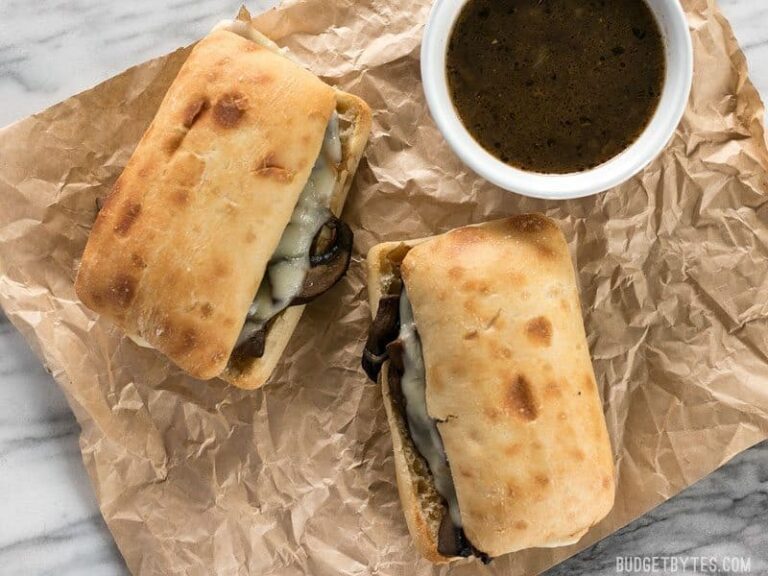 Here on my cooking blog I want to showcase recipes that turned out way better than I thought. First up is this Vegetarian French Dip Sandwiches from Budget Bytes. When I looked at the recipe, I was just hoping for a good and simple vegetarian meal and this fit the bill. What surprised me was just how intensively flavorful this was. Most of the ingredients are mild, but when they all come together it is crunchy, it’s gooey, it’s full of umami goodness! What’s not to love? I’ve made it a few times and each time it’s been delicious!

It calls for portobello mushrooms, but I’ve made it with cremini and other thick and steaky mushrooms and it worked. Likewise, I’ve used beef broth instead of vegetable and that was good. Don’t have provolone? Any mild sliced cheese — Swiss, Havarti — would be good. It’s vegetarian, but if you used your favourite vegan cheese it should feed anyone looking for a vegan meal.

It’s a great sandwich as it is, but you can also use it as a base for additional ingredients. For example,  you could likely add some chopped sweet peppers or some chopped jalapeno when you fry the mushrooms. I can imagine if you added a 1/4 cup of sliced chorizo at the same time that would also be good. Or add some sliced tomatoes or arugula at the end before you fold it together and bite in.

What else can I say? Go to Budget Bytes and get the recipe and get cooking!