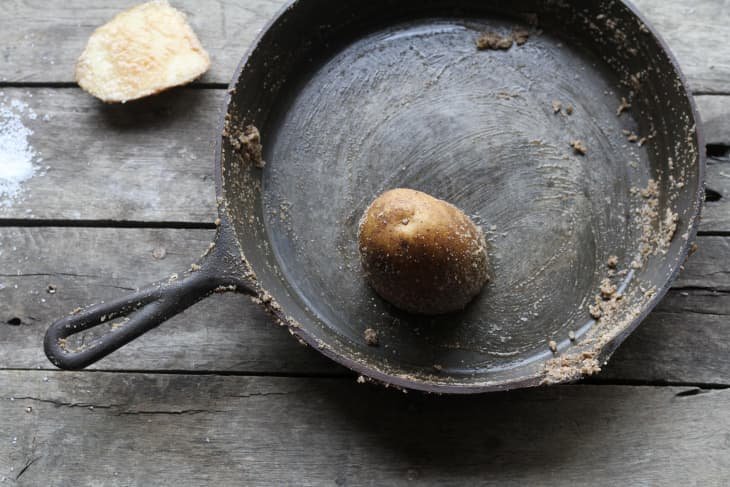 Are you afraid to cook with cast iron? Many people are. I are! I was, I mean. I would read all these articles about seasoning your pans blah blah blah and I’d think: forget that….stainless steel for me.

And then I remembered: I used to have cast iron years ago and it was ok. I would cook with it, clean it in soap and water, then put it on a hot burner until it was totally dry. Occasionally oil it. I liked it.

For some reason I stopped using cast iron. Or so I thought. But then the other day I recalled I have a cast iron baking pan. Guess what? Sometimes I don’t dry it properly and it rusts. So what do I do? I just clean it in a regular way, dry it, put some cooking oil on a bit of paper towel and rub it. Boom! Done!

Now I am not an expert on cast iron. The authors of these articles are. Read them if you want some expert tips on cast iron.

Don’t overthink it. Two things people do are overthink pie crust and overthink cast iron. Don’t be one of those people. Use it, get it clean, dry it thoroughly, add a bit of oil and you are done.

As to how much oil I use, I just add a few drops and spread it around with a paper towel. It really takes not much of anything.

Do you have to use cast iron? Of course not. But it’s nice to and once you start using it you will see why. It has a great feel, it takes as much heat as you can throw at it, and things cook differently (in a good way) in it, or at least I think. Try it and think for yourself.

P.S. Do you need a potato to clean with cast iron? No. You can, but I don’t. I just liked the picture. 🙂